Pain Management Options in Labor and Delivery by Dr. Hanno

Ectopic pregnancy is a medically urgent situation in early pregnancy, where the pregnancy implants outside the uterus.  This most often occurs within a fallopian tube.  In rare cases, ectopic pregnancies can attach to an ovary or another organ in the pelvis/abdomen.   Ectopic pregnancy can lead to a life-threatening emergency if it grows to the point of rupturing and causing internal bleeding

Definitive diagnosis of ectopic pregnancy can initially be challenging.   It is not uncommon for women to experience spotting/bleeding in early pregnancy.  When this occurs, it is your provider’s role to determine whether this is due to ectopic pregnancy, miscarriage, or unexplained bleeding in an otherwise healthy pregnancy.  Your provider will likely use a combination of taking a detailed history, blood tests, and ultrasound to make the diagnosis.  Sometimes a series of blood tests and ultrasounds are required to make a final diagnosis.

Treatment options for ectopic pregnancy include medication (Methotrexate) and surgery (which sometimes involves leaving the affected tube in place, and sometimes requires removal of the affected tube).   The option that is most optimal and safe for you will be determined based on the clinical situation at hand.

Risk factors for ectopic pregnancy include but are not limited to:

Note that, in general, these risk factors mostly are situations that cause the fallopian tubes to become abnormal in some way.  Remember that if you experience spotting or vaginal bleeding during pregnancy, it is important to notify your obstetric provider.

Pain Management Options in Labor and Delivery by Dr. Hanno

Please see these two links to maps and instructions on how to get to Southdale Hospital for Labor and Delivery. 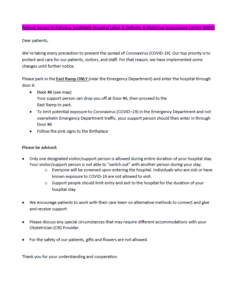 Directions to Southdale Hospital for Labor and Delivery 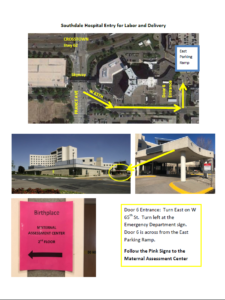